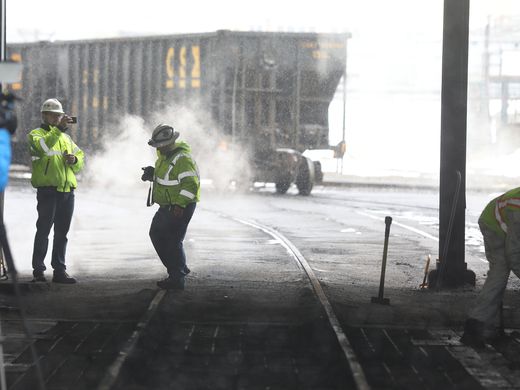 For more than a century, the towering smokestacks of Kodak Park have spewed the exhaust of coal-fired plants powering the industry giant’s manufacturing operation.

At its peak in the 1990s, the park was capable of generating close to 3 million pounds of steam and 200 megawatts, officials said — enough to power a city of 200,000 homes.

The needs are lesser now. The environmental regulations more stringent. And coal is no longer needed, as a $75 million conversion to a more efficient natural gas plant serving what is now Eastman Business Park is nearly complete.

The last rail cars loaded with coal arrived at the plant this week — a final delivery that should provide power through Sunday, officials said.

“You have people, and I am one of them, who have worked with this equipment for many years and it has done a lot of great things for the site,” said Bernard Nee, who has been at Eastman Business Park nearly 40 years and now works as chief technology officer for park utility operator RED-Rochester. “But ultimately we have to position the site to meet the long-term energy needs of Eastman Business Park.”

Rather than sadness at another hallmark of Kodak fading into the history books, he said: “I look at it as more we are building on the foundation that came before us.”

The power plant operations are at the center of an expansive system providing everything from electricity and steam to compressed air and sewer services for Eastman Kodak Co., a dozen independent business customers and tenants that rent or own space in the business park.

It is the last coal-fired plant in the Rochester area, one of only three remaining in New York state. And, historically, it is one of the most polluting in New York state — allowed to have less robust pollution control equipment than utility plants because it was an industrial, not utility, boiler.

Chicago-based RED bought the park’s utilities from Kodak in 2013, using state assistance including a $3.5 million loan and $3.6 million grant. Total acquisition costs were placed at $12.4 million. The RED-Rochester portfolio was sold in September 2016, part of a multi-plant deal to Illinois-based Ironclad Energy Partners, backed by partner Stonepeak Infrastructure Partners. A purchase price was not disclosed.

Some of the boilers were converted, while others were shut down and a new gas boiler plant was added, which had a phased startup beginning in December. When the changeover is complete, the smell of burning coal, the particulate that settles on neighborhood windows, the visible smoke from the stacks should be gone. But those old smokestacks, rising up to 400 feet high, will stay, with one remaining in use. New stacks associated with the new gas plant are a quarter the size, officials said.

The railroad, some 13 miles of track, will continue to service the park, with LiDestri Foods and Kodak Specialty Chemicals remaining regular customers. Rail use should increase as the park continues to be redeveloped, said Tim Palmer, vice president for Eastman Business Park. But the coal-powered plant was the main user. The operation used 300,000 tons of coal in 2017, ferried by 3,000 rail cars. Twenty years ago, Nee said, those numbers were likely doubled.

Kodak plans to keep at least one of its locomotives and sell or lease the other two. A smaller railcar mover will be added next month.

After Kodak, the only two coal-fired plants remaining in operation in New York are Cayuga Operating Co. in Lansing, Tompkins County, and Somerset Operating Co. in Barker, Niagara County. Both are electricity-generating.